THE KIDS COMPANY YOU NEED TO KNOW ABOUT AND WHY

Living in Ottawa, Canada means two things: winter will come and it will be cold. Last year the twins were still so small all winter that we didn’t spend much time outside. When we did they got bundled up into their snowsuits and slept in the bassinet pieces of the stroller. As this winter quickly approached I knew it would be the opposite. We were going to be spending lots of time outside thanks to daycare every day, Ottawa is known for cold winters and the twins were going to be walking sooner rather than later too.

I also had no hand me down boots from B that would work. Her first winter was a super mild Toronto winter and I think we maybe played in the snow twice? So she had survived in some thick fall boots. My first stop was the thrift store and I found some super cheap Sorels. But after the first snowfall I realized the Sorels weren’t going to work: they were too clunky and heavy, they wouldn’t stay on their feet and none of us were happy about it.

That’s when I knew it was time to invest in some mimiTENS for them.

Started by Anna-Maria Mountfort, mimiTENS is a small Canadian company she created to make the mittens she always wanted. Started with just mittens the brand has now grown to include booties, neckwarmers, backpacks… So many goodies!

The mittens come in three different styles so you can find the pair that work best with your outdoor environment. Currently the website has the all weather mimiTENS which are warm and water repellent. Their products are made right here in Canada in ethical factories that provide safe work environments and proper wages. I love the options they have for their patterns; you can do colours, animals or even a Raptors themed pair!

Even the way they chose their name is adorable. MimiTENS come from the French phrase ‘mes mitaines’ which is ‘my mittens’ in French.

OKAY THEY’RE CUTE, BUT DO THEY REALLY WORK?

They DO! I waited to make this post until we had used them for a little while so I could give the honest scoop about them. I honestly had not realized how many parents had never heard of mimiTENS until I first posted them. I’m so happy to finally answer all the questions!

So. The biggest question is, what makes mimiTENS so special? Aren’t there other gloves just like them? Well, yes and no. I know what you mean when you say gloves just like them. While there are other gloves on the market that feature the longer arm length they still don’t compare. They’re bulky the whole way up, the zipper can be a hassle and the thumb is usually still placed in a way that’s difficult to get the little fingers into the thumb hole. MimiTENS sleeve is a long stretchy cuff – think like the tube of a sock but cuter – so it’s incredibly easy to fold down, pull up and it stays up! It’s thin enough to fit under coat sleeves of all sizes with no issue but stretchy enough to fit over the puffiest of sleeves. I can stuff the MEC toaster suit sleeve into it, have the mitten stay on and not have the cuff stretch out either. Ours are the all weather style mittens. They’re lined with both Thinsulate™ and with Oeko-Tex® certified bamboo/cotton fleece so they’re warm and soft. While the mittens feel on the thinner side the girls have always come back in the house with toasty fingers!

I’m not going to lie, I was a little skeptical about the matching booties as I ordered them. But I’m a sucker for raccoons and still hadn’t found another bootie I felt like buying second hand, so I took the plunge and added them to the cart. The biggest question is can they walk in them and the answer is yes! Walking in the snow is still a general struggle for the girls but the last few times we’ve gone out they’ve had no issue standing and walking with them on. They’re weightless compared to regular boots and stayed on fairly well while crawling. I will say that if you’re expecting a long time outside with lots of crawling, definitely have them on under the snow pants. I find that having them crawl a lot with the tube on the outside made the tube slowly wear down their legs, but have had zero issues having them under the snow pants.

Unlike some of the similar booties, they’re already lined for you. So you don’t need to worry about buying additional pieces to make them warm enough. Will they be warm enough without socks? No, you’ll still want socks. But nothing crazy – the girls wear regular socks and are toasty warm when they get in. Noteworthy: they’re water resistant, not water proof. So, they’ve been great for snow play but did not withstand the puddle jumping that happened on a warm day when the snow was melting.

MimiTENS have been a lifesaver in quite a few situations now. Aka: no more lots mittens or boots/shoes! We’ve already had a few mittens and fall boots go missing or almost missing this year because they could pull them off in the stroller, toss them around the car or they’d fall off while I was baby wearing and I didn’t notice. I’m still missing a fall boot that is missing somewhere in the van. Since the tube part goes so far up the arms and legs, its difficult for the younger ones to pull off on their own. These booties are the BEST for baby wearing. I used to stress so much about shoes and boots falling off but not anymore!

So in conclusion, yes mimiTENS should definitely be on your shopping list. They have a sizing chart to help you decide which size you should get. The ones I got for the twins are a little big (they were in-between baby and size 1) but having them be slightly big hasn’t caused any issues yet. 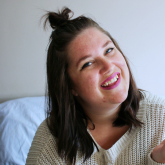 I’m Ashleigh, a twenty-something mama to three adorable crotch goblins. You may also know me as coffee addict, obsessive thrifter and grown up emo kid. I have a passion for creating and a mission to spread positivity.  When I’m not busy wrangling the million kids in my house, you can find me writing about motherhood, body normalcy, kids activities and just about everything in-between – all while belting out some Disney lyrics.